We’ll discuss possible events for the coming months. We’ll also warm up for Can-con convention the following weekend. See more about it at:
www.can-con.org

Please RSVP at our Meetup site www.meetup.com/ottawasfs-ca/
or by email to: events@ottawasfs.ca

Dear Friends,The purpose of this message is to invite you to a meeting to establish an organizing committee for Prose in the Park (PiP), a new initiative for a major open-air literary festival/book fair in Ottawa in 2015.

We have set up the following website to explain the proposal in detail http://deuxvoiliers.wix.com/prose-in-the-park . We invite you to read the information there. Here is, however, a summary of the project initiative.The proposed PiP venue is the Parkdale Park in Hintonburg (between Parkdale and Hamilton streets and just north of Wellington Street West). PiP will be a tented literary festival/book fair with the main authors events taking place on the covered stage in the park. The date of PiP is yet to be determined but notionally it would be on one Saturday from late Spring to the end of Summer 2015. We hope to attract 2000 book lovers, 60-70 local authors; 10-15 out-of-NCR authors (e.g., from Montreal, Toronto, Kingston, and Perth); 10-18 publishers. The Ottawa public library, NCR-based bookstores, literary online and print magazines, literary festivals, reading series and national/provincial writers organizations with members in the NCR would also be invited.

We have the Dining Room from 7:30 until they close. Since the show isn’t on until 9pm, there will be lots of time to have dinner and socialize. And yes, the room is accessible.

Please RSVP at our Meetup site www.meetup.com/ottawasfs-ca/ or by email to:
events@ottawasfs.ca 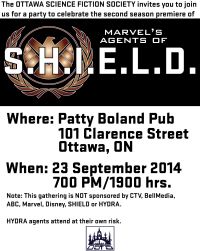